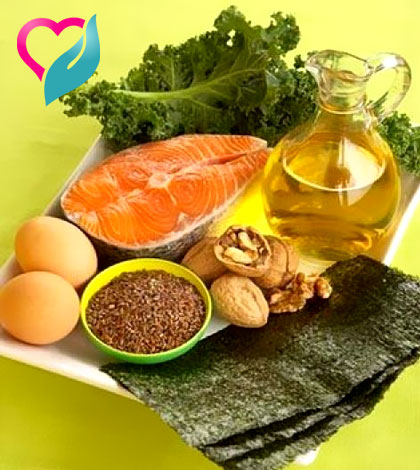 You have probably heard that eating healthy means cutting down on fats. Yes, it’s best to limit the chicken fry, cheeseburgers, and potato wedges. But not all fats are bad for you. Some can help your brain and heart work. And some can help your baby develop in the womb. Omega-3 fatty acids are the good kind of fat. They are the essential fatty acids. They are necessary for human health but the body cannot make them; you have to get them through food.

Omega-3 fatty acids can be found in fish, such as salmon, tuna, and halibut, other seafood including algae and krill, some plants, and nut oils. Also known as polyunsaturated fatty acids (PUFAs), omega-3 fatty acids play a crucial role in brain function, as well as normal growth and development. They have also become popular because they may reduce the risk of heart disease. The American Heart Association recommends eating fish (particularly fatty fish such as mackerel, lake trout, herring, sardines, albacore tuna, and salmon) at least 2 times a week.

Research shows that omega-3 fatty acids reduce inflammation and may help lower risk of chronic diseases such as heart disease, cancer, and arthritis. Omega-3 fatty acids are highly concentrated in the brain and appear to be important for cognitive (brain memory and performance) and behavioral function. In fact, infants who do not get enough omega-3 fatty acids from their mothers during pregnancy are at risk for developing vision and nerve problems. Symptoms of omega-3 fatty acid deficiency include fatigue, poor memory, dry skin, heart problems, mood swings or depression, and poor circulation.

Fish, plant, and nut oils are the primary dietary source of omega-3 fatty acids. Eicosapentaenoic acid (EPA) and docosahexaenoic acid (DHA) are found in cold water fish such as salmon, mackerel, halibut, sardines, tuna, and herring. ALA is found in flaxseeds, flaxseed oil, canola (rapeseed) oil, soybeans, soybean oil, pumpkin seeds, pumpkin seed oil, purslane, perilla seed oil, walnuts, and walnut oil. The health effects of omega-3 fatty acids come mostly from EPA and DHA. ALA from flax and other vegetarian sources needs to be converted in the body to EPA and DHA. Many people do not make these conversions very effectively, however. This remains an ongoing debate in the nutrition community; fish and sea vegetable sources of EPA and DHA versus vegetarian sources of ALA. Other sources of omega-3 fatty acids include sea life such as krill and algae.