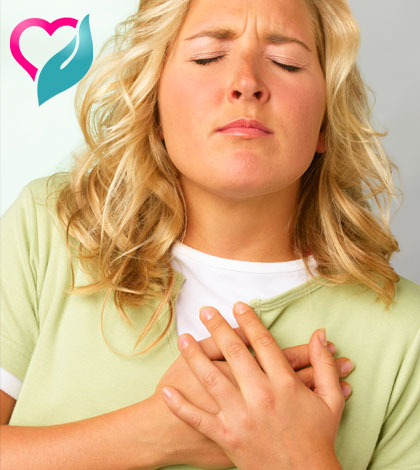 Most people experience digestive upsets like belching, gas pains, and heart burn. While these symptoms might be common, they might indicate the presence of a health condition.

If you look at gas pain, it is something common that is experienced by everyone at some point in their lives. While passing gas or flatulence is almost a part of our daily routine, it can be embarrassing if it becomes in excess. Again, when gas gets trapped and causes pain, it can raise false alarms regarding a heart problem. Sometimes certain foods can lead to intestinal gas build up or lead to constipation or diarrhea.

While gas pain in the chest might be felt, it is mainly due to gas build up in the abdominal region. Gas is formed when the bacteria in the colon ferments the carbohydrates that have not been digested in the small intestine. Other causes are:

For many people the symptoms or the signs of gas pain are obvious like voluntary or involuntary passing of gas, belching, sharp pains in the abdominal area, jabbing pains in the chest, tightness or swelling of the abdomen, feeling of bloatedness, and absence of appetite.

When gas pains are not serious, they are usually for a brief period and they pass on by themselves. Sometimes, the symptoms of gas pain can be mistaken for heart diseases, appendicitis, gallstone and other ailments. While it is normal to pass gas several times in a day, it should not cause discomfort or pain in the abdomen which can be unusual and cause for concern.

When you have gas pain in the chest and it causes discomfort you need to lie down with the head elevated and rest in this position for some time to reduce the discomfort.

Often the gas build up is due to poor digestion. If fluids are taken in plenty, it helps to move the undigested food along. The fiber rich food which usually causes buildup of gas is aided in digestion by increased fluid intake.

Carbonated drinks add to the gas formation and increases the discomfort. The pain in the chest due to passing of gas will increase due to intake of such beverages. Carbonated drinks tend to have empty calories and hence, one will be adding on unnecessary sugar in the system.

You could kneel on the bed with the buttocks in the air and the head facing down. That is a position which encourages the excess gas to pass out of the system. One could lie down and press their two legs against the stomach. At the same time, while breathing in, one should try and force the air out like passing of gas. When doing so make sure you are alone. When trying to push out the air from your abdomen ensure that the stomach is empty.

Mustard is consumed to prevent gas buildup. Indian spices like cardamom, cumin and turmeric are known to have beneficial properties for aiding the digestion. Ginger is known for its curing properties. One could use these spices to lightly prepare curries that will reduce the bloatedness or gas buildup in the stomach.

It is said that fluid intake reduces the gas build up in the abdominal region. If one drinks or consumes hot water or hot beverages like tea, it helps to move the gas along the digestive tract and release it out naturally.

Tea like peppermint tea offers relief. Ginger or chamomile tea are also beneficial. Herbal tea has anti flatulent properties which prevents the buildup of gas in the stomach.

Lack of exercise can cause poor digestion for which gas buildup occurs. Going for an evening walk or simply increasing one’s physical activity will provide relief. Doing sit ups will get the gas moving and will force it out of your system.

If you have charcoal capsules at home they will help to reduce bloatedness. Excess gas and impurities of the system are removed by such supplements.

You could try and have a hot cup of water with baking soda added in it. It helps to reduce flatulence.

Contact your doctor if you have recurrent gas pains or if you experience heart burn more than twice a week.