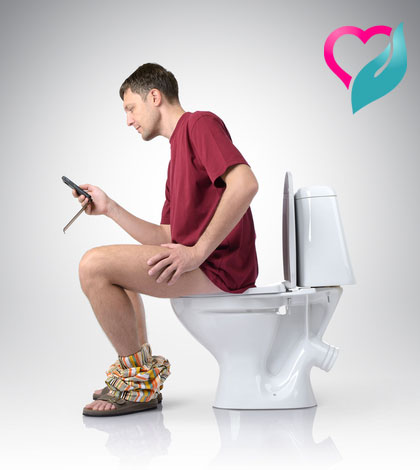 Every individual had at least mimicked once to pee like their oppositesex do. Though it is not written anywhere, it has always been an accepted fact that girls should pass urine in a sitting posture, while boys should do the same standing.

For girls, their urinary organs are designed in such a way that standing up and urinating would be very untidy. For boys they have a better control over urinating in a standing posture, due to their distinctive male organs.

But the conventional peeing methods are now scrutinized for better hygiene and health. A partial squatting position while urinating is becoming more common among girls and women to avoid sitting on a contaminated toilet seat.

Peeing by sitting reduce the risk of prostate cancer

The systematic review and meta-analysis published in a very reputed journal PLOS ONE shows that, sitting while passing urine could lower the risk of prostate cancer and provide men with a more healthysex life. Studies in Japan have shown that thirty percent of men sit while they pee, and countries like Sweden and Taiwan have put through proposals to encourage men to follow the same.

Researchers in the Department of Urology at Leiden University Medical Center in the Netherlands examined eleven studies comparing the effects of sitting versus standing by using three different urodynamic parameters such as maximum flow rate, voiding time (the time that it takes to pee), and post-void residual volume (the amount of urine remaining in the bladder).

According to their research, they recommended that men with lower urinary tract symptoms (LUTS) should consider peeing in the sitting position as they will be able to empty their bladders more by following this method. Residual urine in the bladder is associated with increased occurrence of bladder stones and urinary tract infection. But the same study has showed that healthy males were not influenced by position, meaning that they could urinate in either position.

Discussions about the optimal position in which to urinate and the benefits associated with it, have become quite common. The standing position is often regarded more masculine than sitting and as a way to differentiate men from women. Thus apart from providing a possible benefit of a more healthysex life, men are encouraged to use the sitting position for hygiene issues as well. 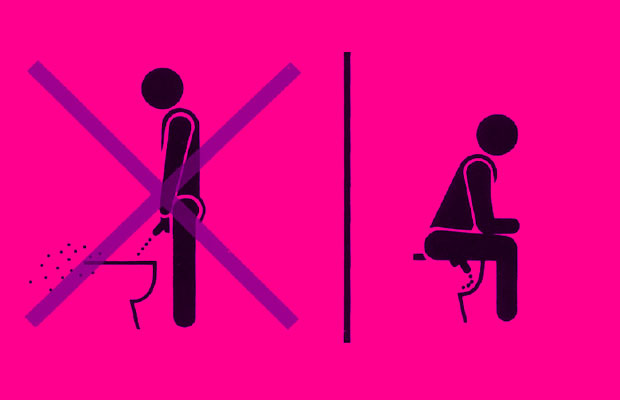 Men with LUTS, Other Prostate Problems May Improve Urination By Sitting Down

Forget how it might bruise your ego; if sitting down on the toilet improves your ability to urinate comfortably because you suffer from a prostate condition, such as lower urinary tract symptoms (LUTS), there’s no shame in the act.

A new study in PLOS ONE finds that while sitting down offers men without such prostate issues no measurable benefit, men who suffer from LUTS are able to urinate faster, with greater force, and leave less urine behind in their bladders. These are all challenges men with the condition face, in addition to the rarer complications of urinary pain and excessive urination at night.

“Ever since men had the choice to urinate either standing or sitting, the optimal voiding position has been a topic of discussion,” write the researchers, of the Leiden University Medical Center in the Netherlands. Were our bodies designed to stay upright, or were we meant to submit to gravity and squat? Despite the comparable technology advances in the West, Eastern cultures have stayed loyal to the act of squatting. The modern toilet simply isn’t for everyone.

But whether it’s necessarily better isn’t all that understood. “Only a handful of studies have investigated the effects of voiding posture on urodynamic parameters by comparing the standing versus the sitting position,” the authors write. So they conducted a meta-analysis, which is just about the least fun way to conduct a pee study.

From the 14 medical databases they looked at, from a total of 2,352 publications, 96 studies eventually got whittled down to the most viable 11. The findings were consistent across each study, despite slight differences in methodology and overall goal. “We found that in patients with LUTS the sitting position is associated with a trend towards a more favorable urodynamic profile,” they wrote. The profile confirmed each measure they hypothesized about: When men with LUTS sat down to urinate, they did so faster, longer, at a greater pressure, and released more urine than men with LUTS who stood.

Men when get aged chances to get prostate-related issues are more, and combined with the fear of falling is a hesitancy to go. Among younger subjects, however, this isn’t an issue. So the researchers proposed that the ease with which urination takes place while sitting is also a factor.

While standing, the body goes to great lengths to keep an erect spine and maintain posture. This activates many of the discrete muscles near the hips and pelvis. But when people sit, these pelvic and hip muscles are relaxed, making urination easier.

So what’s the moral of the story? What you do in the privacy of a public bathroom stall is your own business. People have been sitting and squatting to urinate for far longer than they’ve been standing.