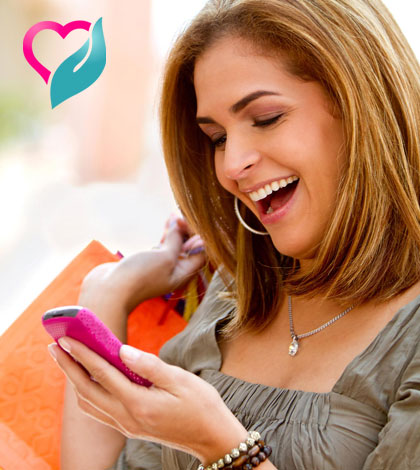 Technology has changed drastically over the years and has changed many things including the way we flirted. No longer do you have to meet in person or make a phone call to flirt.

Thanks to instant messaging, texting, social networking, chats; it is easier than ever to charm a girl! But telling whether a girl likes you is a hard thing to do through a text message. Usually, it is much easier to tell if a girl likes you when speaking to her in person than it is through texting. Non-verbal communication is more obvious when someone is standing in front of you. However, there are certain clues used in text messages that, if identified, can give you a good idea of whether or not a certain girl likes you.

Pay attention to how often she starts the conversation. If initiating the conversation always falls on your shoulders, odds are, she is not very interested. On the other hand, if she starts the conversation too often, she might not be interested, either. When a girl likes a guy, she will likely try to show her interest without being too obvious or looking too needy. As a result, she will start at least half of your conversations if not most, but probably won’t start all of them. If a girl does start all of them, it could be a sign that she is not worried about seeming needy because she only sees you as a friend.

Consider whether or not she usually says good-bye first. Even if a girl is tempted to hang on your every word, she will resist the urge. If anything, a girl who likes you is more likely to end a text conversation first in an effort to show that she is interesting and has an engaging social life even without you. When a girl ends most texting conversations with something like, “gotta go, I’m heading to movie with my boyfriend,” she could be interested. If, however, she just stops texting instead of saying good-bye, she is probably not interested.

Count the emoticons. Make a mental note of how often she uses emoticons and which ones she uses most. The most often used emoticon a girl will flirt with is the winking face. The more often she uses an emoticon wink, the more likely it is that she has a thing for you. Standard smiles may or may not mean the same thing, but large smiles are another good sign. A blushing emoticon and a “kiss face” emoticon may also frequent her texts if she likes you.

Determine how interested she is in what you have to say by her replies. If she has good, thorough responses to your comments, it shows a higher degree of interest in your thoughts and, by extension, a higher interest in you. If she quickly turns the conversation to herself, she might not be interested. Similarly, if she gives super quick answers like “K” or frequently leaves the conversation with little more than a “brb,” she probably is not very interested. If she regularly jokes back with you when you say something funny, though, or asks you questions to keep the conversation, it demonstrates that she wants to keep talking to you for as long as possible.

Be encouraged if she starts to tease you. Texts like, “you should be wishing you were here right now…” or “If you were here right now…” are usually meant to tease you into wondering what the rest of the sentence would read, especially when they end with the “…” They are mildly suggestive without being too over the top, implying that she wants to get you to think about her and wonder about her feelings and intentions a little more.

Note the content of her messages. If most of her texts are practical, such as question about assignments, then she may not be interested. On the other hand, if her texts are personal and ask about your personal life, she might be interested. This is especially true if she recalls specific details you previously mentioned to her about your plans. Another promising type of text is the random question. Look for something of no significance, like, “Would you rather live on nothing but your least favorite food for a year or give up your favorite food for the rest of your life?” These questions are fairly unimportant, and if she asks a bunch of them, it could be a sign that she is looking for an excuse to talk to you because you are on her mind.

Pay attention to punctuation. Specifically, look at how often she uses exclamation points. More exclamation points indicate more excitement at the opportunity to talk to you, which could signify that she likes you. A “Hey you!” is infinitely more promising than a simple, “Hey.”

Look at how many of her words are unnecessarily long. Not every girl does it, but many girls add extra vowels and consonants onto words. For instance, she might text words like “heyyyy,” “riiiiiight,” “pleeeeeaaassseee,” or “byyyyeee.” The idea is to mimic the elongation of words often used in real-life flirtatious banter.

Watch out for text giggles. Any text laughter is a good sign, but there are some that are better signs than others. Standard abbreviations like “LOL,” “ROTFL,” or “LMAO” can be sent to just about anyone, friend or crush alike. A “ha ha” is a better sign, because she wants you to actually imagine her laughing. A “he he” or “tee hee” is even better. These two forms of text laughing are the equivalent of a real-life giggle, rather than a loud laugh, and a girl is more likely to text you a “giggle” if she wants to sound cute.

Ask yourself if she frequently drops any hints. A common hint dropped via text is the invitation to meet in person. An actual invite to a party is good, but an even better invitation is the random “on the fly” sort, in which she casually mentions something like, “I think I’ll head to the pool. Meet me there?” These messages may seem casual, but in actuality, they usually indicate that she wants to see you and only you, and now. A strong desire to see you is a pretty good hint that she is interested.

While these can be indicators of her likeness towards you, these are not very accurate and varies with people. People usually say things they do not really mean over text messages and emails. Girls tend to be flirty with guys they are not really interested in over the phone. It’s hard to tell. If you like her and would like to know if she likes you, probably the best way to go about is to ask her face to face. If she gets all nervous, damn she likes you!