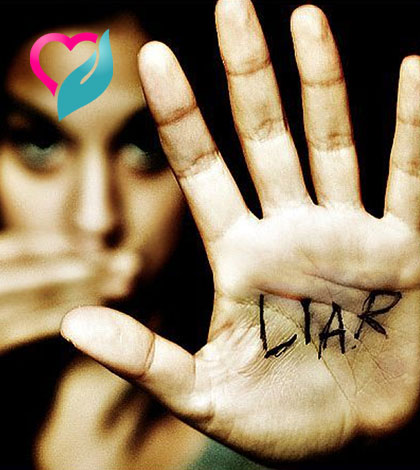 The natural tendency of a human beings living in a natural environment is to say the truth, always.

But as part of our higher intelligence, when we started creating our own environments and controlling the very nature of it, there arose a need to lie. Though lying is always extra effort and has a risk of ruining relationships, humans have resorted to it for many reasons. People lie often for personal gain, cheat someone, or to simply play a prank on friends. Our body language speaks about us, and no matter how hard we try to hide the truth it will come out one day. EHC tries to dig out some signs and body language indicators that can help you figure out truth from lies.

Eyes are the primary organs involved in any communication. The biggest indicator someone is telling a lie is lack of or too much eye contact. It is a common belief that when people lie they avoid eye contact and look elsewhere. While this is often true, some liars make too much eye contact just to make you believe they are speaking the truth.

When people lie they often exhibit signs of nervousness or anxiety. Foot movement is the biggest indicator of anxiety and nervousness. Liars often shake their legs or make regular leg movements to avoid tension and run away. This can be used as a clear-cut clue to catch a liar.

This is a verbal clue displayed when people lie. When lying people often stay silent during the conversation or offer shorter responses. They also use more ums, ers, and ahs to fill in the gaps. If a person is making more speech errors it is an indication of lack of truth.

If you observe someone communicating in higher pitch than normal it can be a sign of lying. Some people also maintain lower than normal pitch. High or low pitch indicates there is something off.

People often shrug their shoulders when they don’t know or agree to something. If someone is shrugging while speaking it may indicate they don’t agree with what is coming out of their own mouth.

Some sweat excessively when they lie. This abnormal sweating happens because of the adrenalin rush from anxiety and nervousness.

The thought process required to support a lie should be fast. Not everyone has fast thought processes so they change the subject to something completely different.

When people lie they often touch objects lying around to relieve stress. Some people might act as if they are more interested in the object than the conversation to avoid confrontation.

Studies have found that when people lie, they often rub their nose. It’s a scientific observation, experts believe the adrenaline rush opens the capillaries of the nose making it itchy. Some people also cover their mouth and eyes while lying, this is an uncommon observation.

Lying puts stress on our body and the biggest indicator of body stress is a dry mouth. In order to rectify the dry mouth, liars are often observed licking their lips often.

If you see someone suddenly make a head movement when you ask them a direct question, they may be lying to you about something. The head will be retracted or jerked back, bowed down, or cocked or tilted to the side. This will often happen right before the person is expected to respond to a question.

It is common knowledge that people fidget when they get nervous, but you should also watch out for people who are not moving at all. When you speak and engage in normal conversation, it is natural to move your body around in subtle, relaxed, and, for the most part, unconscious movements. So if you observe a rigid catatonic stance devoid of movement, it is often a huge warning sign that something is off.

A telltale sign of lying is that a person will automatically put their hands over their mouth when they don’t want to deal with an issue or answer a question. It becomes difficult for them to speak. This occurs because the automatic nervous system decreases salivary flow during times of stress, which of course dries out the mucous membranes of the mouth.

Providing Too Much Information

When someone goes on and on and gives you too much information – information that is not requested and especially an excess of details – there is a very high probability that he or she is not telling you the truth. Liars often talk a lot because they are hoping that, with all their talking and seeming openness, others will believe them.

When trying to figure out if someone is lying, you need to first understand how the person normally acts. For example, if this person usually blinks rapidly, they will likely do the opposite when lying, such as stare at you without blinking. Go ahead and observe people with these tips in mind. You might turn out to be a mind reader!

One thought on “How to Catch Someone Lying – Body Language”