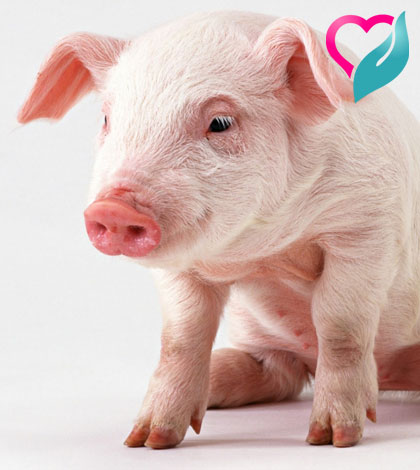 Pork is the cosmetic name for domestic pig meat. It is one of the commonly consumed meats worldwide. But it has also been maligned over the years for being high in fat and being bad for the body. To a certain degree, these statements are true. Here we are going to examine this speculation further and get down to the real facts about this animal protein.

Eating pork could be harmful to health in a many ways. This harm still persists today, despite all the precautions that are taken. First and foremost, no matter how clean the farms and environments on which it is raised may be, the pig is not by nature a clean-living animal. It often plays in, and even eats, its own excrement. Due to this and its biological structure, the pig produces much higher levels of antibodies in its body than other animals. In addition, far higher levels of growth hormone are produced in the pig compared to those in other animals and human beings. Naturally, these high levels of antibodies and growth hormone pass across to and collect in the pig’s muscle tissue. Pork meat also contains high levels of cholesterol and lipids. It has been scientifically proven that these significant amounts of antibodies, hormones, cholesterol and lipids in pork represent a serious threat to human health.

When pork is eaten in large quantities, it can wreck havoc on the body. It tends to have more fat than beef or chicken to start with, making it higher in calories. Secondly, there is usually added butter, oil and salt in the preparation, adding even more calories, fat and sodium. This can cause high blood pressure, high cholesterol, cancer, sodium retention and heart problems, not to mention weight gain and obesity.

If there is a family history of heart disease and high cholesterol, then eating pork is probably not too good of an idea. Physicians often advise to wean pork out of the diet for this reason.

Trichinosis is a parasitic disease caused by the roundworm Trichinella spiralis. It follows the eating of raw or inadequately cooked meat, especially pork. The larvae are released, reach maturity, and mate in the intestines. The parasites are then carried from the gastrointestinal tract by the bloodstream to various muscles, where they become encysted. In many people, the disease exhibits no symptoms and is discovered only at autopsy. In others, it causes diarrhea and other gastrointestinal symptoms as the worms multiply in the digestive tract. Once the larvae have imbedded themselves in the muscle tissue, the cysts usually become calcified; however, the infestation usually causes no further symptoms except fatigue and vague muscular pains. There is no specific treatment.

Pig’s bodies contain many toxins, worms and latent diseases. Although some of these infestations are harbored in other animals, modern veterinarians say that pigs are far more predisposed to these illnesses than other animals. This could be because pigs like to scavenge and will eat any kind of food, including dead insects, worms, rotting carcasses, excreta (including their own), garbage, and other pigs.

Influenza (flu) is one of the most famous illnesses which pigs share with humans. This illness is harbored in the lungs of pigs during the summer months and tends to affect pigs and humans in the cooler months. Sausage contains bits of pigs’ lungs, so those who eat pork sausage tend to suffer more during epidemics of influenza. 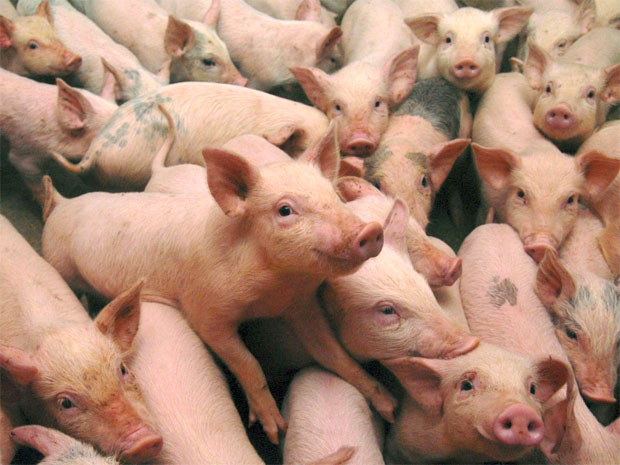 Pig meat contains excessive quantities of histamine and imidazole compounds, which can lead to itching and inflammation; growth hormone, which promotes inflammation and growth; sulfur-containing mesenchymal mucus, which leads to swelling and deposits of mucus in tendons and cartilage, resulting in arthritis, rheumatism, etc.

Eating pork can also lead to gallstones and obesity, probably due to its high cholesterol and saturated fat content. The pig is the main carrier of the taenia solium worm, which is found in its flesh. These tapeworms are found in human intestines with greater frequency in nations where pigs are eaten. This type of tapeworm can pass through the intestines and affect many other organs, and is incurable once it reaches beyond a certain stage.

The digestive system of a pig is completely different from that of a cow. It is similar to ours, in that the stomach is very acidic. Pigs are gluttonous, never knowing when to stop eating. Their stomach acids become diluted because of the volume of food, allowing all kinds of vermin to pass through this protective barrier. Parasites, bacteria, viruses, and toxins can pass into the pigs flesh because of overeating. These toxins and infectious agents can be passed on to humans when they eat a pig’s flesh.

Eating pork can cause high blood pressure if it contributes too many calories to your diet. Obesity is a risk factor for high blood pressure, and you gain weight when you eat more calories than you expend. In moderation, leaner cuts of pork can be part of a calorie-controlled diet because a pork chop has 40 calories per ounce, but a fatty meat, such as cured salt pork, has 212 calories in a single ounce.

Pork is a dietary source of iron and selenium. Diets high in pork have been linked in population studies to higher risks of esophageal, thyroid, lung, pancreatic, liver, bladder, colorectal, and prostate cancer, as well as non-Hodgkin’s lymphoma.

How to Identify Bad Pork

Sniff and smell the pork. If it has a neutral smell, then it may still be safe to eat, even if you’re a couple of days past the date on the packaging. However, if you come across a sour smell or a foul odor, the pork is spoiled and should be thrown out.

Touch the pork with your finger. If the meat is slimy or sticky, it is no longer good. The meat should feel firm and slightly wet.

Look for discoloration. Your pork should be a light reddish-pink color, but if you notice spots of green or gray, it has spoiled. If the meat appears slimy or moldy, throw it out. Never attempt to cut off the “bad” parts of the pork and attempt to save the non-inflicted areas to eat. Once you see discoloration, the whole piece of pork is spoiled.

Determine if you have practiced safe food storage with the pork. Safe food storage refers to how well your meat was preserved after you bought it at the store and took it home. Check to see whether your refrigerator is set to 40 degrees Fahrenheit or colder. Also, if you already cooked the pork, think back to whether you put the pork into the fridge promptly after eating your meal, or if you left it sitting out on the counter for longer than two hours. The FDA says that all cooked and leftover foods should be back in the fridge without two hours for maximum freshness.

Count the number of days you’ve had the cooked leftover pork in the fridge. Cooked meats can last safely in the fridge for a few days, but if you think you’ve had the leftovers for a week or longer, it is safe to assume that the pork is no longer good to eat.

EHC assumes its readers to be responsible and individualistic. What you choose to eat is always a personal decision. This article highlights the risks of eating pork and the ways to find and avoid bad meat.