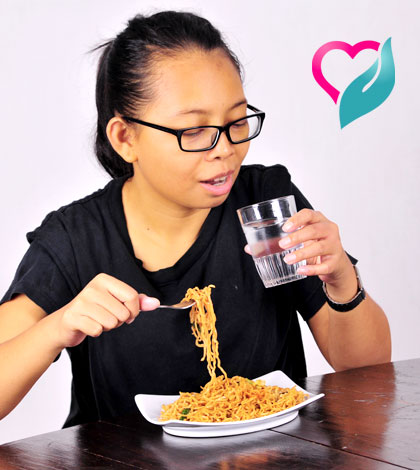 The tall glass of water next to our food makes one wonder if the meal is not complete without that glass of water. Most of us think that drinking water with meals is necessary and good for health. EHC went ahead and did some research here and found some interesting facts about drinking water and meals.

Many of us have the habit of drinking water while eating. When one settles down for a meal, invariably he places a glass or pitcher of water besides him. There are five types of people depending on the way they drink water while eating.

The first type – These guys take a glass or two of water and then begin their meal assuming that it reduces their hunger and consequently reduces their body weight. The second type of people takes water frequently to facilitate easy gulping down of food and to stop hiccups. The third type consume one or two glasses of water after eating food believing that ¾ of food and ¼ of water helps digestion better. The fourth type drink water ½ an hour after their meals as they find it inconvenient to drink water while and immediately after meals. A fifth type drink water while eating because they feel thirsty and their throat dries out.

For the fifth type, there are some reasons. Firstly, they do not drink enough water (5-6 liters in a day) rest of the time. Secondly, people especially in India consume plenty of spices and masala in their food. Thirdly, people don't chew their food properly. If you drink 2-4 glasses of water half an hour before your food, your thirst is quenched and you don't feel thirsty while eating.

Spices and masala obviously makes the food tasty but they lead to many gastric and intestinal disorders. Moreover, they increase body temperature which urges you to drink water. If you avoid these spices and masala, you don't need any water while eating. If you chew your food properly you don't need water to gulp your food.

Your saliva is the first step to digestion. Not only does it contain enzymes that help break down food, but it also helps stimulate the stomach to release digestive enzymes and ready itself for the process of digestion. When you drink water during your meals, your saliva gets diluted. This not only sends weaker signals to the stomach but also stops the breakdown of food in your mouth making digestion more difficult.

The second phase of digestion process begins in the stomach. After swallowing, the chewed food reaches the stomach. Several digestive enzymes and gastric juices are produced there for digestion. One among such acids is the most powerful hydrochloric acid which plays a key role in the digestion of our food.

Along with it there as several other enzymes which helps in the completion of digestive process. Hydrochloric acid kills certain harmful bacteria left over in the food. The food is usually digested in two hours of time when these acids are in concentrated form. Its strength is reduced when water mixes with it. 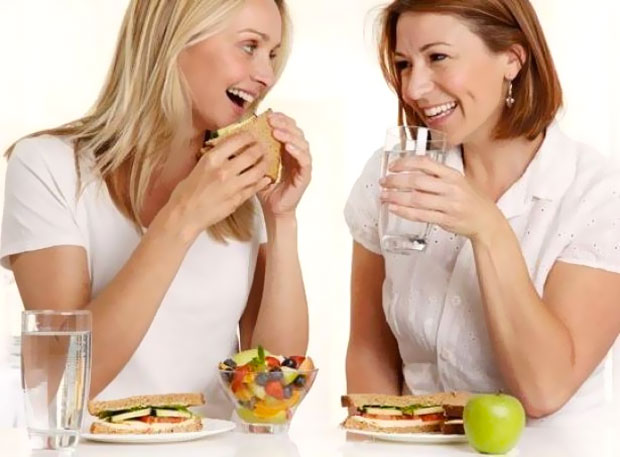 The mild acid fails to digest food as effectively as the strong one. The stomach is forced to produce double the amount of acid to digest food. The increase in the volume of digestive gases leads to burning sensation and formation of ulcers in the stomach. The stomach gets habituated to produce an excess acid which is a very unhealthy practice.

When we drink water while eating, it goes into the stomach along with food. It obstructs digestive juices from reaching the food directly. The food breaks into small pieces with the help of digestive juices and takes a semi-liquid form. However, when we take water while eating it breaks the food into pieces but cannot digest it completely. The process of digestion takes more time.

As the water and food remain in the stomach for long period, food gets fermented and gases are produced. It becomes a tight compartment. The heavy stomach puts pressure on the lower part of the lungs and the lungs contract by 20%-30%. As a result you find difficulty and uneasiness while breathing. The diaphragm, which is an important part in breathing process, undergoes pressure and its movements are restricted. Likewise, the muscles of our stomach which help respiration lose their capacity to expand and contract.

The oxygen we inhale to a large extent reaches the stomach and helps digestion. As long as the oxygen is in the stomach we feel drowsy. As the food remains in the stomach for a long period, the lungs receive less oxygen and we become dull, drowsy and weak. That is the reason why many people yawn continuously after food and some prefer to go for a nap; while some other sleep on the chairs in a sitting posture.

What Should We Do

The general rule of thumb is to avoid drinking water from about 15 minutes before you eat until at least one hour after you eat. Along with it, a little change in your habits goes a long way.

You don't have to forego water during meals altogether. Instead, simply opt to take small sips of water during your meal. This is great for cleansing the palate and maintaining hydration without flooding your digestive system with massive amounts of water.

Iced drinks may be particularly problematic during meals, especially for those with existing digestive issues. If you'd like to have something to sip on during meals, warm liquids are more digestion friendly.

Hydrate before you eat

If you frequently find yourself thirsty during and after your meals, it may help to make a habit of drinking a glass or two of pure water about 15 to 30 minutes before you eat. This can prevent the urge to drink too much water while your stomach is working to digest your meal.

Drink during the day

Drinking during meals can be a difficult habit to break. However, it is easier to do if you keep yourself hydrated the rest of the time. Begin your day by drinking a glass or two of pure water and then make a habit of repeating this between meals. Soon you'll be well-hydrated and won't crave large amounts of water during your meals.

Since salt is a compound that does tend to make one thirsty, it is best you reduce its intake.

Chewing your food has a number of health benefits, and one of those is the fact that your saliva helps hasten the process of digestion. Moreover well chewed food is easier to breakdown and assimilate, allowing your digestive system to do its job well. As you chew, the amount of saliva produced increases, beating the urge to drink water.

This does not mean you cannot drink water before or after a meal, however, it is recommended that you drink water about half an hour to fifteen minutes before starting your meals and about the same time after finishing your meals. This gap of time helps with digestion.