Some call it one of the most powerful plant foods on the planet. Recent studies have suggested that it may have a protective effect against breast cancer, prostate cancer, and colon cancer.

Flax seed, also known as linseed, is one of the ancient cultivated crops since Mesopotamian times, grown for its oil seeds and fiber. Its chewy seeds are packed with full of nutrients, omega-3 fatty acids, antioxidants, minerals, and essential vitamins. The seeds have smooth, glossy surface and flat shape that somewhat appear like sesame seeds, but quite larger, measuring about 5–7 mm in length. In general, there exist two common cultivars of flax; one is predominantly grown for its oil seeds and the other variety for fiber. Seed flax generally features brown, and yellow or golden-yellow color seeds, with most types having similar nutritional values and equal amounts of short-chain omega-3 fatty acids.

Flax seeds are a rich source of a group of chemicals known as lignans, which are known to help protect the body from cancer. Studies on animals have shown that lignans can reduce the growth of abnormal cells in tumors.

Flax seeds are a good source of both soluble and insoluble dietary fiber, which helps to reduce cholesterol in the blood and regulate blood sugar levels. You can add the seeds to breakfast cereals, salads and smoothies to give yourself an extra boost of fiber in your diet.

The lignans in flax seeds also act as an effective antioxidant, which protects the cells of the body from damage from free radicals. This helps to slow down the signs of ageing and helps to balance the hormones in the body. 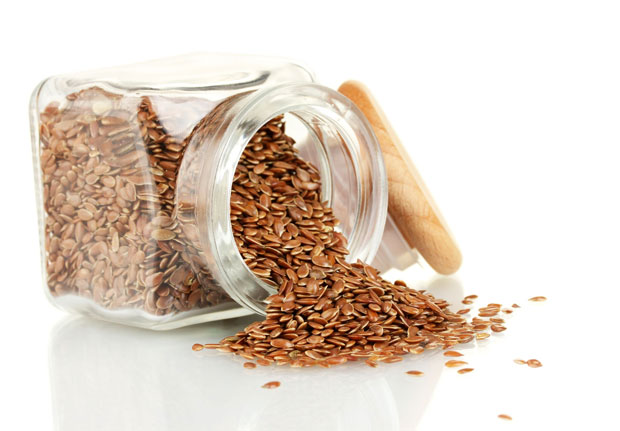 Research has indicated that flax seeds are useful to improve the chances of a woman conceiving a baby. It helps to regulate ovulation process and restore hormonal balance in the body. For women in the post-menopausal stage it has been known to protect cardiovascular disease.

Flax seeds are often used as a replacement for other grains in cooking and baking because they are 100% gluten free. This is of great use to those people who suffer from celiac disease or have a gluten-sensitivity.

Flax seeds contain ALA, which stands for α-Linolenic acid, an omega-3 that can help to protect the limning of the digestive tract. Tests have shown that eating flax seeds can be beneficial to those suffering from digestive ailments, such as Crohn’s disease.

Eating flax seeds can naturally reduce the levels of cholesterol in your blood. The soluble fiber that is found in the seeds traps the cholesterol and fat in the digestive system, before it is absorbed by the body.

Flaxseeds can easily be mixed with other foods since it hardly has a flavor and is very mild in taste. It is an excellent substitute for vegetable oils. The seeds can be eaten raw by mixing it with salads, cereals and yogurt. It can also be popped like popcorn. The seeds can be combined with fruit juices and smoothies without altering the taste of flavor of the fruit.

Flax seeds are indeed wonder seeds. However, it is not advisable to consume it in large quantities or by people suffering from allergies of any kind. You must always start eating a small quantity of the seeds to begin with. Half or a quarter teaspoon will suffice for experimenting initially.