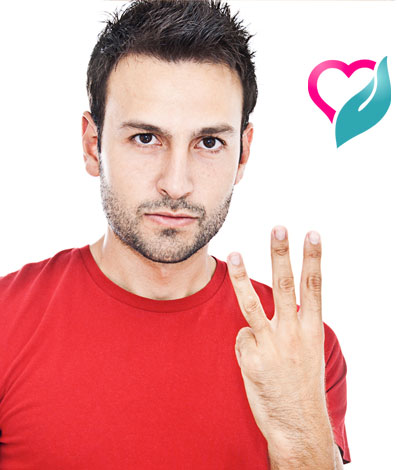 Ha.. you couldn’t help looking at your fingers right after reading this heading… right?! A new study in the Asian Journal of Andrology finds that guys with shorter index fingers than ring fingers tend to have bigger organs.

While we can debate on how the researchers got this information, here is the possible connection. The testosterone men get exposed to while they are still fetuses controls both organ and finger length.

The early testosterone exposure reflected in your fingers (and elsewhere) affects you in many other ways. Guys with shorter index finger than ring fingers—known as a low digit ratio—tend to have a higher risk of prostate cancer, be better at sports and financial trading, and have higher sperm counts.

Ring finger longer than index finger – This is found more often in men than women; people with longer ring fingers tend to excel on the sports field, especially in running and football. Scientists at the University of Bath found that children who had longer ring fingers are better with numbers-based subjects such as Maths and Physics, which are traditionally male favorites. A study this week showed autism may be linked with exposure to testosterone in the womb. Autism is sometimes described as the “extreme male brain” and is four times more common in boys than girls. Finger length might provide an early warning of the condition.

Men, get ready to inspect the length of your index finger. Scientists have discovered that men whose index fingers are longer than their ring fingers are one-third less likely to develop prostate cancer. But “digit ratio” can tell you a lot more about a person, if scientists and researchers are to be believed. That is because finger length tends to be determined by the level of testosterone someone was exposed to in the womb. The following are a few things the length of your finger might say about you.

The most obvious thing the length of your finger tells you is your organ. Men’s ring fingers are normally longer than their index fingers, while womens’ ring and index fingers tend to be the same length.

If you make a lot of money, or not

Researchers in Cambridge discovered that stock traders with long ring fingers made more money than colleagues with shorter ring fingers. Again, this can be chalked up to higher testosterone, which can make men more assertive and likely to take risks.

If you are a homo sensual, or not

A study in California found that gay women tend to have shorter index fingers than ring fingers. Some scientists theorized that exposure to androgens in the womb influence both finger length and sensual orientation, but the effect was not as pronounced among male loving men.

How good you are at sports

Men and women whose ring fingers are longer than their index fingers are more likely to have an aptitude for sports. The correlation is particularly strong in middle and long-distance runners.

If you are good at math

Children with “masculinized” ring fingers — that is, longer than their index fingers — do better in math tests than in literacy tests, found scientists at the University of Bath. Alternately, children whose second and fourth fingers are the same length perform better in literacy tests.

If you are prone to arthritis

So, you may stop taking your hands and fingers for granted. It seems they can say a lot about who we are. While EHC asserts the necessity of further studies at this front, you may go ahead and check out as many fingers as possible.