Psoriasis is a skin condition that causes red, flaky, crusty patches of skin covered with silvery scales. These patches can appear anywhere on your body.

It tends to flare up from time to time. The frequency of flare-ups varies. There may be times when psoriasis clears for long spells. However, in some people the flare-ups occur often. Psoriasis is not due to an infection. You cannot pass it on to other people, and it is not cancerous.

The severity of psoriasis varies greatly. In some people it is mild with a few small patches that develop and are barely noticeable. In others, there are many patches of varying size. In many people the severity is somewhere between these two extremes.

There are different types of psoriasis. However, chronic plaque psoriasis is by far the most common and typical type.

Here the rash is made up of patches on the skin, called plaques. Each plaque usually looks pink or red with overlying flaky, silvery-white scales that feel rough. There is usually a sharp border between the edge of a plaque and normal skin. The most common areas affected are over elbows and knees, the scalp, and the lower back. However, plaques may appear anywhere on the skin. But, they do not usually occur on the face. Chronic plaque psoriasis can be itchy, but it does not usually cause too much discomfort.

There are two variations of chronic plaque psoriasis:

This type of psoriasis usually just affects the palms of the hands and soles of the feet. In this situation it is sometimes called palmoplantar pustulosis. Affected skin develops crops of pustules, which are small fluid-filled spots. The pustules do not contain germs (bacteria) and are not infectious. The skin under and around the pustules is usually red and tender. Pustular psoriasis that just affects the palms and soles is the second most common type of psoriasis.

Rarely, a form of pustular psoriasis can affect skin apart from the palms and soles. This more widespread form is a more serious form of psoriasis and needs urgent treatment under the care of a dermatologist.

About half of people with any type of psoriasis can have fingernail psoriasis. In some people toenails are also affected. Nail psoriasis may also occur alone without the skin rash. There are pinhead-sized pits in the nails. Sometimes, the nail becomes loose on the nail bed. Nails may also change color, and the area around the bed of the nail can become orange/yellow.

This typically occurs following a sore throat which is caused by a bacterium (germ). Round/oval plaques of psoriasis are small (less than 1 cm – drop size) but occur over many areas of the body. Guttate psoriasis normally lasts a few weeks, and then fades away. However, it may last for three to four months in some people. In many people, once it goes it never returns. 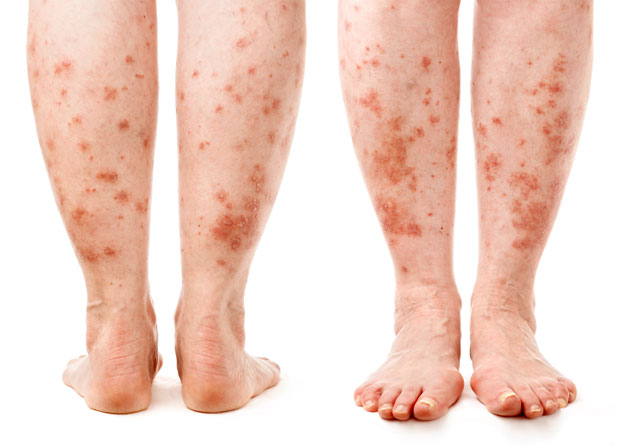 Psoriasis is more common in white people. It can first develop at any age, but it most commonly starts between the ages of 15 and 30 years or after the age of 40 years.

People with psoriasis have a faster turnover of skin cells. It is not clear why this occurs. More skin cells are made which leads to a build-up of cells on the top layer. These form the flaky plaques on the skin, or severe dandruff of the scalp seen in scalp psoriasis.

The cause of the increased cell turnover and skin inflammation of psoriasis is not known. Genetic factors seem to play a part, as about 3 in 10 people with psoriasis have a close relative also affected. Another theory is that the immune system may be overreacting in some way to cause the inflammation. Research continues to try to find the exact cause.

In some people, psoriasis is more likely to flare up in certain situations. These include the following:

Many doctors put emphasis on controlling the symptoms of psoriasis because there is no known cure. Ointments, phototherapy, and prescription drugs are often prescribed, but many sufferers look to alternative therapy to help relieve their symptoms.