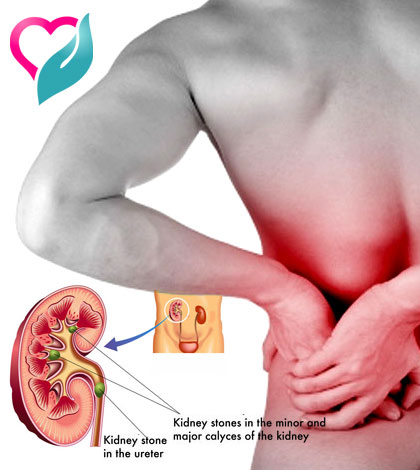 Kidney stones usually comprised of a compound called calcium oxalate, are the result of an accumulation of dissolved minerals on the inner lining of the kidneys. These deposits can grow to the size of a golf ball while maintaining a sharp, crystalline structure.

The kidney stones may be small and pass unnoticed out of the urinary tract, but they may also cause extreme pain upon exiting.

Kidney stones that remain inside the body can lead to many conditions, including severe pain and ureter (the tube connecting the kidney and bladder) blockage that obstructs the path urine uses to leave the body.

The key process in the development of kidney stones is supersaturation.

Different factors may be involved in either reducing urine amount, or increasing the levels of the salts.

Normally, urine contains substances that may protect against stone formation, including:

Not having enough of these protective substances can cause stones.

Changes in the Acidity of the Urine.

Changes in the acid balance of the urine can affect stone formation.

Medical conditions such as Crohn’s disease, urinary tract infections, renal tubular acidosis, hyperparathyroidism, medullary sponge kidney, and Dent’s disease have been known to lead to kidney stones. It also has been suggested that water fluoridation – the addition of fluoride to drinking water – is responsible for some cases of kidney stones. 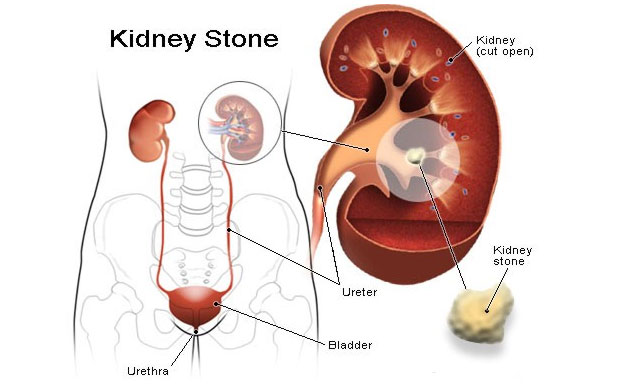 Often, the cause of calcium stones is not known. The condition is then called idiopathic nephrolithiasis. Research suggests that nearly all stones result from problems in the breakdown and absorption of calcium and oxalate. Genetic factors may play a role in about half of these cases. A number of medical conditions and drugs can also affect digestion and intestinal absorption.

Excess Calcium in the Urine (Hypercalciuria).

Hypercalciuria (too much calcium in the urine) is responsible for as much as 70% of calcium-containing stones. A number of conditions may produce hypercalciuria. Many are due to genetic factors, but most cases are due to unknown causes (idiopathic).

The following can lead to hypercalciuria and calcium stones:

Excess Oxalate in the Urine (Hyperoxaluria).

Oxalate is the most common stone-forming compound. Too much oxalate in the urine is responsible for up to 60% of calcium stones and is a more common cause of stones than too much calcium in the urine.

Hyperoxaluria can be either primary or secondary.

Secondary hyperoxaluria is usually caused by too much dietary oxalates (found in a number of common vegetables, fruits, and grains) or by problems in the body’s breakdown of oxalates. Such defects may be due to various factors:

Excessive Calcium in the Bloodstream (Hypercalcemia).

Hypercalcemia generally occurs when bones break down and release too much calcium into the bloodstream. This is a process called resorption. It can occur from a number of different diseases and events:

Hyperuricosuria is a condition in which there are high levels of uric acid in urine. It occurs in 15 – 20% of people (mostly men) with calcium oxalate stones. Urate, the salt formed from uric acid, creates the center of a crystal (nidus), around which calcium oxalate crystals form and grow. Such stones tend to be severe and recurrent. They appear to be strongly related to a high intake of protein. (Hyperuricosuria also plays a major role in some uric acid stones.)

Low Urine Levels of Citrate (Hypocitraturia). Citrate is the main substance in the body that is responsible for removing excess calcium. It also blocks the process that turns calcium crystals into stones. Low levels of citrate in the urine is a significant risk factor for calcium stones. Hypocitraturia also increases the risk for uric acid stones. This condition most likely contributes to about a third of all kidney stones.

Many conditions can reduce citrate levels. Some causes include:

12 thoughts on “Kidney stones and its natural treatment”